Apple’s New iPad: A Horse With No Name 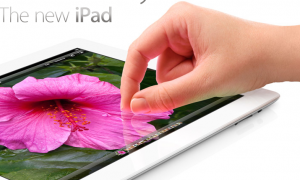 Man, I haven’t blogged in forever. I think about it too much. One shouldn’t think, one should just blog. Blog’s aren’t formal.

Do you like the title? I was trying to think of something funny or cute since while everyone was debating whether this iteration would be called “iPad 3” or “iPad HD” Apple decided not to call it anything!
Apparently this represents symbolically that the iPad has entered into the “Post PC” era. Regular computers such as MacBooks aren’t given special names with each new generation, they simply “just are” and simply have upgrades or “refreshes”
every so often. This symbolizes that the iPad, and more generally, the paradigm it represents: Mobile, Intimacy, has reached a point in the amount of power that it has, to do most of the tasks that we “ordinary” people do in our normal “everyday” world:
Edit photos, word process, browse the net, even some simple video editing.

This new iPad certainly is a horse: double the screen resolution, double the processing and graphics. Apparently the screen is so beautiful that it looks better than a photo print. One for a second just imagines a day when reality just sort of leaps out of such a screen.
Every nerds dream. And if John Wheeler’s “It from Bit” physical paradigm turns out to be true, such a wild fantasy may not be as “far out” as one would expect.

The beauty of the piece, everything Apple makes is not only more functional, intimate, and ‘warm” than others, but also an “object of beauty” will sell itself. Everyone who is into technology drools when they walk into an Apple store. Which begs the question, is Apple a Pornographer?
Maybe. True art, according to Aquinas, isn’t supposed to move you to desire, nor fear. But rather put you into a state of Aesthetic Arrest. Which you know, Apple does that too. So maybe it is true art and not Pornography.

I still can’t believe that the amount of disk space hasn’t changed in two years. No component of computing has more price elasticity in ration to time as disk space. Technologically, disk space increases exponentially faster than even computing power itself, at least double every 12 months, yet this very iPad that came out
today has the same disk space options: 16gb, 32gb, 64gb as the original. That’s insane. Where am I supposed to keep all my downloaded movies, especially if they’re in HD? And all that HD video I’m shooting from the iPad itself.

But you’d be hard pressed to find one tech journalist pointing out this glaring omission. Someone on Google+ pointed out to me that maybe iCloud will take up the slack. Perhaps, but I still don’t know what iCloud is, how it works, or even what it’s supposed to do.

Meanwhile, the Google+ app on my iPhone simply uploads all my photos to the cloud without me every having to think about it.

Having said that, for all it’s minuses, the iPad is light years ahead of the competition on software, apps, interface and the X Factor of it making you feel safe and comforting. Apple’s whole eco system may be a prison, but it’s a safe “Country Club” prison.
Android may make you more free, but you feel less safe, as if you are risking having to live your life ‘out on the streets.’

The emotional factor, which seems like a dichotomy when applied to ‘computing’ cannot be over estimated. It’s leading Apple, currently as we speak, to be the most valuable company in the World, with about a billion dollars in after tax profits per week!
That’s utterly mind boggling. And with this release, they are only going to keep growing.

At the end of the day, even with all the things that annoy me about them, at least Apple, unlike say government contractors, are making their money the old fashioned way: They’re earning it.