Fail Whale: The Shadow Side of the Social Media Experience 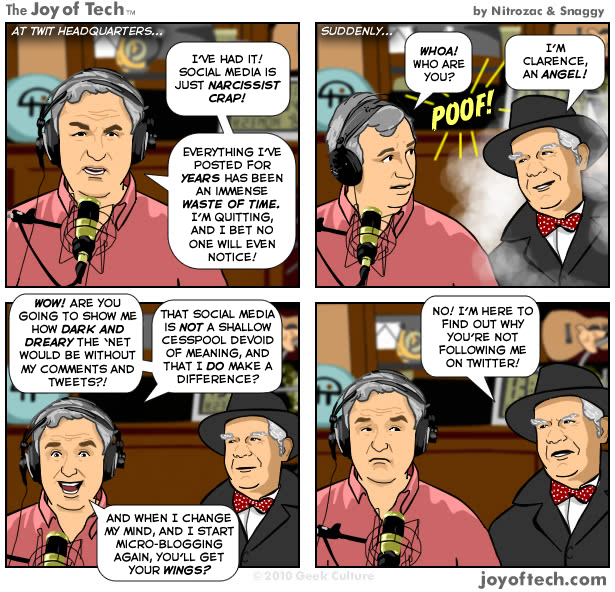 Update Thursday Aug. 26th 2010 – As you can see I wrote this Sunday the 22nd the day after Leo’s blog post. I was a bit too negative and ranting. So I sat on it a few days. Read the always non- controversial Louis Gray’s piece that was also in response to Leo’s original piece Soaked it in. All in all, I’d rather have had Twitter and Facebook over the last few years than not. They are exciting in many ways. Facebook’s like rediscovering old friends. Twitter is new friends. There have been a lot of positive experiences. Still I’ll publish the original rant I felt and wrote Sunday pretty much unchanged, because going forward these negative issues are important and need to be addressed and kept in mind.

Leo Laporte’s post yesterday “Buzz Kill” about how Google Buzz had failed him recently, and more importantly how Social Media had failed him in general, really got me thinking.

A) I totally agree with him. He nailed it. You should read the piece. We put all this energy into “Social Media” and what do we have to show for it? That information and energy goes into a vacuum, a black hole, if you will, and never comes back out again.

Dial it down, Stephen. Dial it down! OK, I’ll meditate on it a few days before posting this, but isn’t that what Twitter, if not literally,  seems figuratively to be screaming at us all day long?

If they hadn’t had the followers number highlighted would the service have taken off? I don’t think so. So Twitter had to appeal to a lowest common denominator “High School Popularity Contest” mentality to, not only make it work, but for it to keep working.

When I first joined Twitter in early 2007 thanks to following early adopters like Leo and Scoble, I thought, “How cool is this? Even though no one in my small town knows about this, I can do all kinds of cools things.” I had always noticed how inspirational or ‘insightful” thoughts would come to me when I least expected them, usually when I was out somewhere in my car, at dinner with friends, etc. and now I could simply text such thoughts to my Twitter account and retrieve them later for expanding. Or if I simply wanted to remember something cool that I saw or heard while out. Just tweet and retrieve. A repository of my daily life, my existence, my continuum, my stream of consciousness.

But where are these insights, these things I wanted to remember, this digital outline of my life that I so dutifully recorded the last 3 years? Gone. I can’t retrieve them. I can’t search them. I can’t find them. And even though one hears that Twitter has been working on such a feature that will be released ‘sometime’ in the future, its like “Gee thanks Twitter, it’s my information, for God’s sakes. I don’t need it some time in the future. I need it now, and every day since I’ve been using your service, feeding your service, so that you could sell me out down the river to Microsoft and Google with your ‘firehose.’

If instead all of this info had flowed into my blog, it would still be there, searchable, mine, the true archive and repository that it was meant to be. Some will say, “Well that is the price you pay for ‘free’”

Oh yeah really? You know, I’m not the biggest fan of Ma.tt in the world, but look at WordPress.com. Totally free. Holds at least a thousand if not a million times more information than Twitter or Facebook, and it yours, you control it. You can put it in and you know you can always get it out. He’s not selling your information to third parties for his gain. He’s upselling (the freemium model) on additional features and using the popularity of the WordPress site and name to make a cut on Web Hosting purchases for those who choose to self host their wordpress blog. He’s Smith Barney. He’s making his money the ‘Old Fashioned’ way.

But look, this is not an attack on Twitter, per se. Facebook is 10x as bad. At least Twitter is semi part of the ‘Open Web.’ Facebook hides behind its wall, not because it wants to protect the privacy of its users, but because it wants to protect its monopoly at the expense of its users. You post a picture into Facebook, it ain’t comin out again. You post a video into a Facebook, not only is it not coming out again, you can’t even SHARE the damn thing with the internet. I mean, how evil is that? That is crazy evil. All the comments and exchanges and time you put into writing messages on the Twitter or Facebook platform? They’re not yours. They belong to these companies. And they can and do disappear at the drop of a hat.

Not to single out Twitter and Facebook. Tumblr, Posterous, Foursquare, Flickr, (just go to Scoble’s Google Profile to see a list of every Web 2.0/Social Media company that’s every existed) just to name a few are all the same. ‘Evil’ gets thrown around a lot. That’s too strong. ‘Evil’ is Hitler. How about ‘Unethical’? More interested in building a brand, a critical mass or ‘network’ effect as they call it, ala the Zeitgeist of the ‘Start Up’ crowd, so they can have a profitable ‘exit’ and IPO rather than being ‘into’ it and wanting to build something cool to benefit the user him or herself.