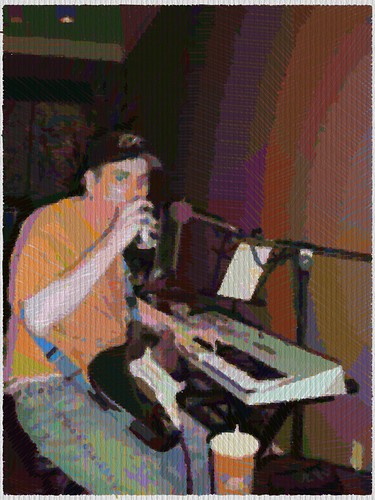 If you’re looking for a how-to article, you’ll be disappointed. No, I don’t have a 10 point list, a “paint by numbers” step by step process to writing a hit song.

Since Christmas, a lot of song ideas have been coming to my head very spontaneously. OK, I’ll take back that first sentence with one little tidbit you can put to work right away

What has happened to me in the past is that an attractive melody and first line or first verse will come to me out of nowhere, and it feels right, but then I’ll bring my “editorial” complex in and nothing I write after feels right. So I’ll stop it there. Record a few moments of the idea, with the thought I’ll come back to it later. Well, guess what? You’ll never come back to it. I literally have a 100 iomega zip drives full of these ideas, that I never have gone back to. Complete the song, right then and there. And what is more, don’t let your editorial complex in. Just write whatever comes to your head until you have a complete song. What happens then? You have a something that takes on a life of its own and doesn’t disappear in your drawer forever. You have material. And then the more you play and sing it, the more you’ll spontaneously edit it with subconscious sounds in your head that have lyrics buried in them just crying to get out. Getting that first draft down, complete, gives them that chance to breathe again.

But really the point of this article is something more esoteric. Lately I have been doing the above and it has helped immensely. But I noticed that when an idea came, I wanted to finish it quickly and then start recording. It was fun at first, but then stress entered the picture. I asked myself, “What’s causing this?”

Then I had a spontaneous thought that I tweeted: “The test of a good song is not whether anyone likes it, but, rather, whether you enjoy playing and singing it.”

With the rush to record, I had gotten myself into this mode of trying to impress an audience. I don’t feel that’s the right attitude. Now I’m starting to have the feeling that, yes, I should finish the song immediately like I mentioned above, but before I start recording let’s play the song for a while, let it build some character, let it breath and start taking on a second life of its own. Then ask yourself, “Do I enjoy playing and singing this song?” The simple answer to that question is whether I’ll start taking the recording of it seriously. If I don’t enjoy it, well at least the process is taking me to a place where something I do enjoy will more likely spontaneously spring to life. It puts the intent into your subconscious mind. If I do enjoy it, playing and singing, then I’ve got something that’s worth the effort of putting down and releasing.

I would apply this philosophy to art in general. Do you enjoy the process? That’s the key. Not the end result. It’s very much in the sense of the Bhagavad Gita: You attach yourself to the process and be unattached to the result. In other words you don’t stress about the result. You don’t stress about anything. You immerse yourself and enjoy the process. You live in the process. The irony is, of course, your end result will not only be better, but more an authentic representation of the archetypal spontaneity that drives your fulfillment to begin with.

What do you think?