I don’t think Netflix is interested in raising their subscription price or tiered pricing. I think they look at the subscription like Magazines and Newspapers in the pre-digital days looked at subscriptions: a validation of intent and also to show the content creators the legitimacy of their audience. I think Netflix’s endgame is to become the “de-facto” global distribution network for digital motion pictures, tv, and entertainment. When that happens, then so many other options for revenue enhancement open up. Paid placement at the top of the page when you sign in, al lá “House of Cards,” for instance, and then also one can imagine theaters dying altogether, and Netflix being THE place the next big James Cameron or Ridley Scott release. That kind of thing is what I envision, and I think* that’s what they are shooting for.

If one wants to dream hard, since we are on the heels of it, wouldn’t a Global audience paying a modest but fair price, not only sufficiently finance the Super Bowl, but perhaps bring the NFL even more money and exposure, in a more satisfying and efficient way for both the content creators and the audience?

The CEO of Citigroup at Davos said that the main economic themes right now are Globalization, Digitization, and Urbanization. It would seem to me that a company like Netflix is not only the beneficiary of, but leading the charge in at least two of the three of those trends.

Addendum: In Response to the article:  What if Netflix, Inc. (NFLX) Is Wrong? from InsiderMonkey.com

I think it makes the medium better and more enduring overall. It can be consumed more like a novel. And if the medium is strengthened that gives more leverage and incentive to make a better product. At the end of the day I think it comes down to whether the show or movie is good or not. That’s the value proposition. What this is, is an innovation in the distribution proposition. All business comes down to two variables: Value + Distribution. This new model is, of course, aimed at greater viewer satisfaction, which of course leads to subscriber growth and more distribution leverage. But is also interesting to think how innovation in Distribution could possibly also affect, in a positive way, the quality, i.e. ‘value’, of the content, the product itself.

Update: 12/28/12 – “Woody Allen.” This is a fantastic documentary, certainly a must watch for his fans, and fans of comedy and film in general. I wasn’t ever going to watch it, even though I love Woody Allen, because I thought for some reason, it would be one of those “Cheesy” documentaries with just like a general overview. But no! Thankfully, my Brother in Law, who is in town for the Holidays told me it was great, and he was right! Greatly directed, Woody Allen himself is interviewed, and it’s like he takes you into his World and his process. I was thinking Woody was so intensely private that he wouldn’t even be in it, but he is all in it, directly. It’s like an intimate look into his World, as well as being a great overview of his career and chock full of direct interviews with the Actors and Actresses that played such important rolls in his work.

11/19/12 – Finally got around to watching “Ira & Abby” last night on Netflix, and I really enjoyed it. I probably would never have considered this movie if I hadn’t seen “Friends With Kids” which I loved. I was wondering who Jennifer Westfeldt was? I loved her performance in that one, and even though this is a bit quirkier, if you’re a fan of hers, you’ll definitely enjoy it. Her personality pervades this one as thoroughly with good vibes and humor as  in “Friends With Kids.” It’s a good movie, and the performances of the parents in this movie (Robert Klein is one, you’ll recognize the others) are fantastic and funny. It works and is enjoyable.

11/5/12 – “Manhattan” by Woody Allen. Man, I love this movie. This is a must see for any movie buff, or even if you aren’t a Movie buff, and you like to read the type of short stories that are in the Paris Review and that sort of literature, I think you’ll love this. This reminds me of an F. Scott Fitzgerald short story, only on film. The tone, the atmosphere, the aesthetic, put me in a blissful aesthetic “arrest.” Which is what true art does. Too bad I actually bought this film on iTunes over a year ago. But I’m delighted it’s on Netflix. It’s timeless and wonderfully refreshing.

11/2/12 – This looks interesting. Just saw it on Ebert’s Facebook: “Out of Sight” with George Clooney and Jennifer Lopez, directed by Steven Soderbergh. Based on an Elmore Leonard novel, so it should be fun. Here’s Ebert’s review.

10/9/12 – Dumb and Dumber – The Unrated Version – Just saw Ebert Facebook about this new streamer on Netflix. There’s one scene that made him laugh so hard he embarrassed himself.  Here’s a link to his comment about it if you have a Facebook account.

8/5/12 This just in from a friend on my Facebook Feed: “watching the documentary, ‘Ultrasuede: In Search of Halston.’ instant Netflix has its advantages.”

Also, I watched most of “The Way” with Martin Sheen on the treadmill. I have about 30 minutes left, which I’ll finish on my next treadmill session. But it’s fantastic. For some reason I was thinking it was a documentary about that pilgrimage. No, no, no. It’s a fictional movie, written and directed by his son, Emilio Estevez, and I love it. Very moving and terrific acting.

8/1/12 – Just saw this headline come through my Facebook feed today: The 50 Best Movies on Netflix Instant from Paste Magazine.

Thankfully, Nick and Jessica do not star in “Newlyweds,” a clever comedy about marriage by @Edward_Burns: bit.ly/Nwlyweds
— Netflix (@netflix) July 19, 2012

This is a nice little movie. Once again, I paid good money to rent it on iTunes. I like these little Burns movies. They’re not big productions, but they’re good stories and focus on the acting and the movements. They feel real, and they’re entertaining.

Update: 6/30/12 – “The Wedding Planner” with J-Lo and again Matthew McConaughey, much younger versions of both, is a cute little movie. Doesn’t take any effort, and entertaining way to spend an hour and a half, and the stars are of course charming and easy on the eyes. So is the backdrop of San Francisco. What man doesn’t dream of a 30 year old J-Lo or what woman a (Well, I’m not sure how old he was in this) McConaughey, especially as a young doctor?

Netflix! I was in the middle of my Ghost Whisperer marathon! FIX IT RAAAAAAAWWWWWWWRR!!

Update 6/29/12 – Apparently “The Lincoln Lawyer” with Matthew McConaughey is now on Netflix instant. Great movie, saw it twice. (I think I rented it both times from iTunes. Dang it!)

Update 6/24/12 – Just saw Mindy Smith, the recording artist, say this on Facebook, “Just watched a great film called Cemetery Junction. It’s on the Netflix so check it out! Gotta love the Britt’s.” (I haven’t seen it yet, but I’ll put it in my Queue.

On another note, I’ve found a cure for my 30 Rock addiction: Arrested Development! I’ve watched 18 episodes in the last few days and haven’t laughed so much since, well, 30 Rock! Maybe more, because the comedy is written so densely. It’s totally different. If you like Jason Bateman in the movies, which I do, you’ll see why the offers came pouring in after he did this series.

Update 6/12/12 – Just saw Ebert tweet that “Shakespeare in Love” is just now on instant. Never saw it. Guess I should.

Well, I burned myself out on “30 Rock.” As much as I love Tina Fey, I watched every episode so many times, I knew every little thing that was going to happen. So I watched the Gary Shandling movie from 2000 called “What Planet are You From” with Annette Bening. I went in not expecting too much. The reviews weren’t great, but I ended up really enjoying it. It was good. You can’t go wrong with a Mike Nichols film. If you like comedies and or Gary Shandling (And I’m a huge fan of “The Larry Sanders Show”) I think you’ll like it.

But what I’m most crazy about is “Sherlock.” I watched the first episode last night and it was crazy good! I’d seen it in the queu for weeks, but didn’t think much about it. But then I heard from two or three people online how awesome it was. So, I decided to dive in. And I wasn’t disappointed! Loved it. Netflix has the first season of 3 88 minute episodes. So they’re almost as long as a movie. Can’t wait to watch episode #2 tonight! 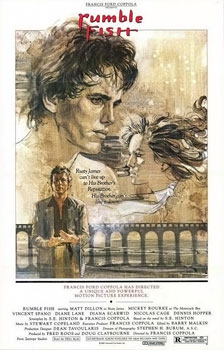 I figured building a repository for this topic would be beneficial. Probably 90% of the recommendations will come from Roger Ebert, where I get mine, and you can follow him on Twitter @EbertChicago or on facebook at Facebook.com/RogerEbert Of course, this list will build as time goes on. Also, leave a comment below of any of your recommendations.