If Everything is Made of Atoms Who or What is Doing the Seeing? 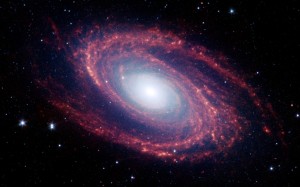 Richard Feynman said that the greatest discovery in history is that everything is made of atoms. That made me think of this. My entire body and everything around me is made of atoms, or more precisely three primary constituents, protons, neutrons, and electrons. So that’s what drives me to ask the question “Who or what in me is doing the seeing?” If you say the neurons, which is a collection of atoms arranged in a specific way, it makes me think of an instrument like a camera. But does the camera have consciousness? It collects photons through a lens and arranges them in a pattern. But until we look at the photo, does anything happen? And even when we do, again who is doing the seeing? Because we are made up of exactly the same three ingredients as the camera, only arranged in a different way.

Update: 10/13/12: As I was stirring my coffee today, the white powdered sugar at the top, as it was swirling around looked just like a galaxy. As I stirred harder the middle of the white froth started to sink in the middle reminding me how space curves inward from gravity. It reminded me that gravity is simply energy. In this case my “Mini” galaxy was spinning from the energy of my hand being transferred to the coffee. So the coffee was like the fabric of space itself. But what I was curious about was although I knew the energy was there and causing the sugar to swirl, I still wondered why the swirling energy made the coffee suck downward in the middle. The coffee wasn’t being sucked downward due to gravity. It was being sucked downward by the swirling energy. Was it only being sucked down because the energy of my straw was pushing the coffee outward towards the sides of the cup? So is gravity not really a force in and of itself but merely the after effect of energy pushing space outward? In that case then somehow this energy pushing space outward must cause a vacuum within Hyperspace (some Physicists refer to this as “The Bulk”) that sucks the the fabric of space inward towards the bulk itself. Interesting. So Hyperspace itself must be causing the attractive force of gravity. Really, when you think about it the “sucking” of gravity is caused by energy moving a portion of space towards the “wall” of Hyperspace (aka the wall of the cup) and so the middle of that portion of space loses its volume and moves away from Hyperspace (In this case the Hyperspace is like the surface of the cup of coffee.)

Related Posts:
Qualia Principles: The Foundation For A Science Of Consciousness – DeepakChopra.com

And if you have a Facebook, it was this photo/post from Deepak that sparked this thought of mine.

2 responses to “If Everything is Made of Atoms Who or What is Doing the Seeing?”